Do the drug pricing conclusions made by the AP News match Apples Two Apples? Read on to find out.

When I read the AP article about 26,176 U.S. drug price changes this sounded very impressive not to mention the media attention. Definitely we agree with the AP’s conclusion that drug prices must come down and yearly price increases are part of the problem. However some of our unpublished analysis didn’t quite match the AP. Therefore our intellectual curiosity demanded further investigation. As a result we’ve analyzed 13,491 drug price changes from 2017 till October of 2018. As soon as we have additional resources 2014, 2015, and 2016 comparisons will be added. 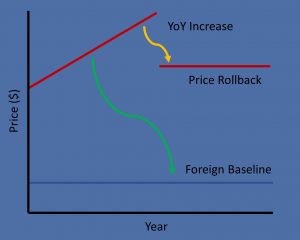 In light of our founding values public data is used whenever possible. As a result we use data from NADAC (National Average Drug Acquisition Cost) which is published by the U.S. government while the AP uses private data. With this in mind here are the results of NADAC drug prices compared to the AP article. 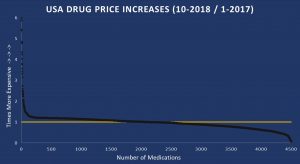 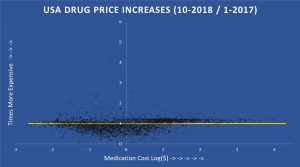 By and large this is what we expected. Surprisingly we don’t know how the AP found so many drugs that go up in price because it doesn’t seem statistically possible. For one thing lower price generics tend to follow the behavior of the free market and drop once multiple drug companies compete. Even pharmaceutical executives openly admit drugs are priced as high as the market can bear. Similarly the AP and our team have found that in particular brand name drugs repeatedly increase prices to maximize profit.

On the other hand brand name drugs in foreign countries typically remain at the same negotiated price for years. For this reason quantifying how much U.S. drug prices increase misses the big picture. Instead the target drug price for the USA should be what foreign countries pay and that is often a fixed target. In conclusion brand exclusivity and the lack of pricing limits allow U.S. prices to be the highest in the world. Ultimately the U.S. system is designed for excessive drug prices.